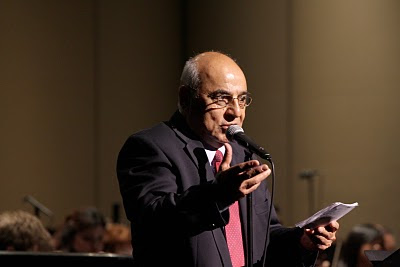 Assyrians once were a mighty empire whose rule reached far beyond Mesopotamia. Their arts and sciences, their culture dazzled the known world and became the model for nations to emulate.

Then, in 612 B.C., the Assyrian empire fell, never to rise again. The magnificent royal buildings, the great libraries, the massive temples that had symbolized Assyria’s greatness turned into ruins strewn with artifacts and slowly disappeared under the dust. In time Assyria became a forgotten address in the world’s book of nations. All gone.

All except Assyria’s descendants who held their head high and embarked on a long and bittersweet journey to find a home of their own. What they took with them everywhere was their identity. Their national pride. Their culture. Their arts.

That the ancient Assyrians loved their music is evident in the love today’s Assyrians have for their music. After all, people do not change that much, really, not even over thousands of years. That goes for the Assyrians, as well. They really have not changed that much, except for their religion.

Much like today’s Assyrians, my ancient ancestors must have loved to dance. Dance flows in our blood. Did the ancient, then, dance the khigga? The tolama? The shora? The hoberban? The tanzara?

The word sheikhani is derived from bishkhana, meaning “warming up.” Legend goes that the Assyrian soldiers and hunters danced to some form of the sheikhani beat to warm up before going into action. I can only imagine that powerful picture.

How far back the sheikhani goes in our history I don’t know. Nor do I know the ages of our other dances popular today. Are they hundreds of years old? Thousands perhaps? What is obvious is that often dancing is a descriptive but complex act performed to a certain type of music. I suppose you can also dance without music, especially if you’ve had one too many glasses of khamra. Ancient Assyrians must have had music to dance the sheikhani, khigga, tolama, shora, hoberban, tanzara, and who knows how many other dances that might have disappeared into the pages of history.

It is that music which fires my curiosity. About which I often fantasize. I wish I knew what it was. What it sounded like. How it was played. And who sang it or played it. Perhaps our scholars know and I am no Assyrian scholar.

“Music is well said to be the speech of angels,” wrote Thomas Carlyle, the 19th century Scottish historian and philosopher. “In fact, nothing among the utterances allowed to man is felt to be so divine. It brings us near the Infinite.”

Yes it is. And it does. Of course, the music of my ancestors I hear in my Assyrian soul. Always have. Always will. Yet, I would love to hear it with my ears as well, sung or played in a village somewhere in northern Iraq or in Urmia in northwest Iran. I can just imagine myself mesmerized by the music that in all likelihood is as close to the original that my Assyrian ancestors sang and played.

Perhaps someday I shall. For now, I’ll take pleasure in the music of my ancestors in modern dress. Please join me for this unforgettable experience at the fourth annual Mesopotamian Night gala concert and fundraising event, August 21, at the Gallo Center for the Arts in Modesto, California.

The show’s first half spotlights Assyrian music in the western classical tradition, with the 50-piece Mesopotamia Symphony Orchestra conducted by John Kendall Bailey.

The musical feast includes Assyryt Suite No. 2, an orchestral arrangement by the French composer Michel Bosc of Paulus Khofri’s works. Bosc’s Ninos and Shamiram, a cantata for soprano, tenor and orchestra, set to Yosip Bet Yosip’s poem, recreates a portrait of tender love between the Assyrian nobleman Ninos and the beautiful shepherdess Shamiram. George Somi’s orchestral suite The Assyrian Legacy and Sam Madoo’s arrangement of William Daniel’s music for string quartet round out the exciting first half of the program.

Following a big auction of Assyrian art, the great Assyrian singer and song writer Walter Aziz sweeps over the Mesopotamian Night stage in the second half with an exciting fare of Assyrian popular songs, accompanied by the Mesopotamia Symphony Orchestra, and spiked with a hearty dose of ballet and dance, in sparkling Assyrian costumes, by the Presidio Dance Theatre, choreographed and danced by Sherene Melania.

This is one of those rarities in the Assyrian performing arts that I hope can become a standard around the world. Our arts are a symbol of who we are as a nation, where we come from and where we are going. And like the arts of any nation, they need a willing audience, and often a helping hand.

“Without music, life would be an error,” wrote the German philosopher Friedrich Nietzche. We Assyrians have always known that, for we have worn the rich history of our music on our sleeve, to take wherever we go.