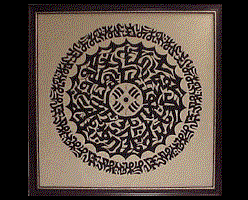 We are hoping Mesopotamian Night 2009 will be an occasion to honor Rabi Issa Benyamin, a living Assyrian legend among us. In the past two Mesopotamian Night concerts, while he has not been able to attend, he has been a gracious contributor by sending us beautiful pieces of calligraphy to auction. We are hoping he will be in good health snd will be able to join us this August. It is worth mentioning that Rabi Paulos Khofri and Rabi Assurhadoun Khorfi are Rabi Issa’s first cousins.

We are presenting here an article contributed to this blog by the Assyrian scholar Eden Naby. Dr. Naby this year is joining us as an honorary committee member and a major sponsor of the Qateeni Opera.

We Honor Rabi Issa Benyamin because…

– He has dedicated a large portion of his life to promote Assyrian culture
– He has been instrumental in promoting, throughout the world, calligraphy in the Assyrian Aramaic language,
– He worked to restart Assyrian journalism among Assyrians in Iran after the genocide had dealt a grievous wound to a culture with the oldest tradition of periodical publication in all of Iran.
– He has created beautiful art works that give new life to our written word, the oldest continuous written and spoken language of the Middle East.

Rabi Issa now lives in Illinois (USA) but he was born in Tabriz (Iran) to a family originally from Salamas. In 1924, the year of his birth, Mirza Benyamin Kaldani (1879-1966) and his wife Esther were still refugees in Tabriz, waiting, like thousands of other Assyrians from Urmiah and Salamas to return to the towns and villages they had been forced to abandon between 1914 and 1918. Only one-third of the Assyrians living in the string of settlements stretching westward from Urmiah to Urfa (Edessa), survived the attacks by Kurds, Turks, and Azeris. Less than half that portion were ever allowed to return to reclaim their homes. The others entered the diaspora in Russia, Georgia, Armenia, Ukraine, Kazakhstan, Uzbekistan, many parts of the Middle East, Europe, South and Central America, the US, Cananda, and then Australia and New Zealand. The pattern of persecution of Christians in the Middle East continues and adds to Assyrian refugees especially from Iraq.

Returning to Urmiah, Mirza Benyamin continued his activities in Assyrian cultural circles, working closely with Mar Havel Zaya (1892-1950), the Archbishop of Urmiah and Salamas. Rabi Issa’s love of his mother language gained encouragement from Mar Zaya, his mentor and teacher from the age of seventeen.

As he built his professional life and started a family, Rabi Issa worked as a math teacher, and later as a human resources administrator at the Iranian environmental ministry in Tehran. He married Clara Manassarians of a leading family in Golpashan, and they raised a son, Ramsin and a daughter, Ramica, both of whom have played key roles in promoting their father’s journalism work and his calligraphy.

The long tradition of Assyrian journalism, beginning with Zahrira d-bahra (Rays of Light 1849-1918) died out when two-thirds of Assyrians died. The genocide reduced a community that had had the highest literacy rate in Iran (men and women) to one that had trouble mustering the resources to publish any periodicals. Their presses had been stolen and their trained printers, journalists and editors scattered and killed. The first Assyrian printing appeared as a mimeographed calendar meticulously hand written by Rabi Issa in 1948. Surgada Umtanaya (national calendar) started Rabi Issa on the road to journalism. He, together with friends such as Rabi Kooresh Benyamin (no relation) worked on Datid Barana (A rosy future) in 1951, and then Ishtar, a publication that battled mightily to preserve ethnic and religious rights in Iran on the eve of the consolidation of the Islamic Republic in Iran. Rabi Issa was the Assyrian language editor of this weekly Assyrian-Persian publication: Majlis representative Dr. Sargon Bet Oshana (1927-1988) was its licensed publisher from 1981 to 1983 when his arrest on political charges brought an end to this fascinating documentation at a key turning point of Assyrian and Iranian history. (For more about the role of Ishtar and its editors in Assyrian life, see Ishtar: Documenting The Crisis In The Assyrian Iranian Community.)

Rabi Issa’s most artistic contribution to Assyrian culture lies in the field of calligraphy. Some of the most beautiful and creative tableaus of our words and alphabet have flowed from his pens – on paper and on leather. Many exemplars may be seen in the book Assyrian Calligraphy but others are in private homes such as that of his niece, the operatic singer, Marganita Vogt-Khofri of Zurich.

Words take shape, in the hands of this master, to suit their meaning so that they may inspire us to action: khuyada (unity), or teach us to avoid their curse: pulaqa (divisiveness). In another creative use of Assyrian calligraphy Rabi Issa enfolds the letters of a person’s name to form an inspiring shape suited to that person’s contribution to Assyrian culture. Arian Ishaya, Rosie Malek-Yonan, among others have been honored with such personalized calligraphy.

One of the most enduring ways in which Rabi Issa has promoted Assyrian calligraphy is through the poster in which he represents all our letters and through the book, The Assyrian Alphabet Manual, in which he shows where to begin each letter when writing cursively. His development to fifty-two fonts for our alphabet will inspire future generations through digital reproduction. More about Rabi Issa and his calligraphic work may be found at http://www.calligram.com/

Anyone who has seen the calligraphy of this great artist will know why has been honored with awards in Paris, Tehran, Chicago, San Jose and why his work has been exhibited at the Smithsonian Folklife Festival in Washington, DC.