Introducing The Singers of “Ninos and Shamiram”

We gladly announce that Liisa Dávila and Brian Thorsett will be singing the cantata “Ninos and Shamiram” in Mesopotamian Night 2010 musical concert. Below is a short account to these two accomplished artists.
Liisa Dávila 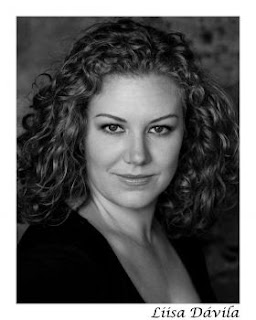 Soprano Liisa Dávila has been heard as Donna Elvira (Don Giovanni), Pamina (Die Zauberflote), Poppea (L’incoronazione di Poppea) and the title role in Massenet’s Cendrillon with California State University Opera Theatre in Sacramento, and will sing the role of Micaela in the Townsend Opera Player’s production of Carmen in Modesto, California in 2012. A winner of multiple competitions, Ms. Dávila is a recent San Francisco District winner and a Western Regional Finalist for the Metropolitan National Council Auditions and the prestigious West Bay Opera’s Maria and Ben Holt Scholarship. This year she won the First International Phyllis Osterhout Vocal Competition in Turlock, California, and placed third in the Washington International Vocal Competition in Washington, DC, and a semi-finalist for the Loren L. Zachary Competition in LA.

A talented performer, Ms. Dávila was selected from nation-wide auditions to participate in the Sherrill Milnes 2010 “Opera as Drama” program in New York for the V.O.I.C.Experience Foundation, and the OperaWorks 2009 Advanced Artist Summer Program in Los Angeles, California directed by Ann Baltz. Ms. Dávila’s concert work includes performances as soprano soloist in Beethoven’s 9th Symphony and Mozart’s C Minor Mass with the Academy of All Hallows in Sacramento, as well as Bach Cantatas 140 and 179 with the First Presbyterian Church of Roseville, Mozart’s Vespers Solemnes with San Joanquin Delta College, and other performances of Requiems by Rutter, Duruflé, Mozart, and Fauré. Liisa has had the pleasure of studying with Eilana Lappalainen, Dr. Robin Fisher, Marla Volovna, and Zoila Muñoz and performing in masterclasses with such greats as Frederica Vonstade, Fabrizio Melano, Gregory Buchalter, Luana DeVol and Sacramento Opera conductor Timm Rolek.

Since taking to the operatic stage in 2001, tenor Brian Thorsett has been seen and heard in over 70 diverse operatic roles, ranging from Monteverdi to Britten, back to Rameau and ahead again to works composed especially for his talents. During the 2010-11 season, he returns to the roles Jupiter and Apollo in Semele, Acis in Acis & Galatea and adds the roles of Beppe in I Pagliacci, Gastone in La Traviata and Ninos in Michel Bosc’s lush Ninos & Shamiram.

As a concert singer Brian fosters a stylistically diversified repertoire of nearly 100 works, which has taken him to concert halls across the US and Europe. Future engagements include Evangelist and soloist in Bach’s St. Matthew Passion and Mass in B Minor, the Seasons and Creation of Haydn, Handel’s Messiah, Monteverdi’s Vespers of 1610, Purcell’s Hail, Birght Cecilia, Beethoven’s Christus am Ölberge, Choral Fantasy and Mass in C, Mendelssohn’s Christus, Elijah and Lobgesang (Symphony No. 2), the Requiems of Mozart and Verdi, Schubert’s Intende Voci Orationis, Psalm 92 and Mass in E-Flat, Finzi’s Dies Natalis, Dvorak’s Stabat Mater, Britten’s Now Sleeps the Crimson Petal and Serenade for Tenor, Horn & Strings and a rare performance as Ishmael in Bernard Hermann’s Moby Dick.
An avid recitalist, Brian will be featured in recitals in San Francisco, San Jose and Half Moon Bay, CA presenting the music of Monteverdi, Grieg, Rossini, Enescu, Coates, Ginastera, Turina, Britten, and premieres of Nicholas Carlozzi. He is a graduate of San Francisco Opera’s Merola Program, Glimmerglass Opera’s Young American Artist program and spent two summers at the Music Academy of the West.