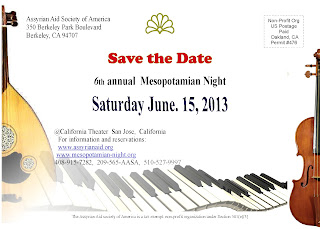 1. Mesopotamian Night 2013 is set for June 15th, 2013 at the California Theatre in San Jose, California.
2. The program content are being developed.
3. Obeit Yadgar has returned as the writer for the project after his absense in 2012 project.
4. John Bailey Kendal will continue to serve as conductor for the Mesopotamia Symphony Orchestra.
5. The old songs of late Rabi Yacoub Bet Yacoub will be one segment of MN2013 presentation.
6. The songs of the late Shamiram Urshan will be another segment of our presentation. The Assyrian singer Stella Rezgo http://www.stellarezgo.com/ will sing Shamiram songs.
7. The songs of late Edward Yousif (Biba) is the third segment of our presentation Assyrian songs.
8. At least two songs from Rabi Nebu Issabey will be presented by a large choir group. The magnificent Oratorio of “Mar Benyamin” is the feature presentation of the choir group. Re. Samuel Khangaldy has orchestrated and arranged this oratorio.
9. The musical commedy “The Marriage Proposal” of Rabi William Daniel is our other feature presentation. This work again is being orchestrated and arranged by Rev. Samuel Khangaldy.

More information will be provided as we make more progress.