Mesopotamian Night 2013 will have a special presentation of late Rabi Yacoub Bet Yacoub old songs thank to a generous contribution by the Jacob family and in particular Mr. Ted Jacob. Below is a short biography by Mrs. Samira (Shamiram) Hermes, his daugher. 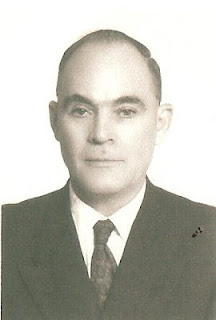 Rabi Yacoub was born on December 25, 1896, in the village of Goolpatalikhan, Urmia, Iran, to Yacoub and Marganita.

He was named after his father who had passed away only a few months before his birth. He and his older sister Shooshan were raised by their mother Marganita and maternal grandfather Zaia (known as chokha Zaia). 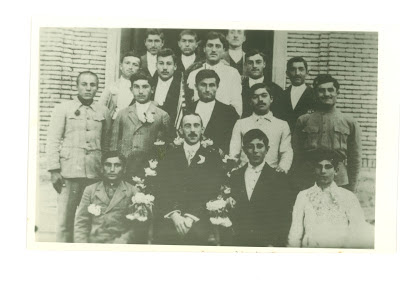 In 1917 he graduated from the American Mission College, which was known to the Assyrians as “Madrashta the’ Qalla”, taking general subjects.  Amongst his teachers at the college were Rabi Pera Amrikhas of , Rabi Isaac Urshan, and Qasha Isaac Malik. And for advanced studies, he was sent to . Due to War turmoils, the was closed in April 1918. That year Rabi Yacoub enlisted in the Assyrian Army in the Artillery division under the command of Agha Petros and Agha Mirza. He was involved in the battle of Ushnuk Saboulack.
In Apshina () he re-enlisted in the army for a period of three months. The British and Agha Petros were enlisting men for the purpose of returning and taking Urmia. Later the British changed their mind and the enlistees were disbanded. The Assyrian exodus from to Kirmanshah and eventually Baquba () took 35 days. During this period Rabi Yacoub was sick. After his recuperation, he was requested by a Mr. McDonald to teach in Camp No. 1 in Baquba. About 150 students, mainly, “Assyrians “ attended school for a period of two years. 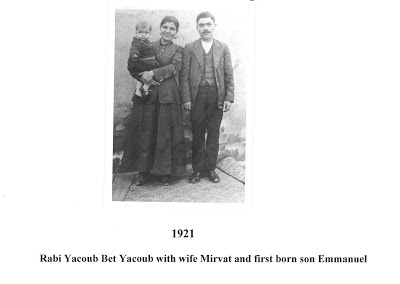 While in Baquba, he met an Armenian widow Nevart Khachatorian “known as Mervat”. They were married by Qasha Keena. He adopted her two daughters Arpineh and Kenarik. In 1920, the Assyrians were sent to () and the Armenians to Basrah (). Meanwhile his son Emmanuel was born. Rabi requested that he and his family be sent to Basrah, hoping that from there they would go to the . This did not happen. Because of his slight military experience, he was asked by a British commander, whom he had met in Baquba, to train a platoon to guard the Armenian camps. Later he worked as a Tally Clerk for the . In 1922 he resigned this post and moved the family to where he was involved in a business for two years. 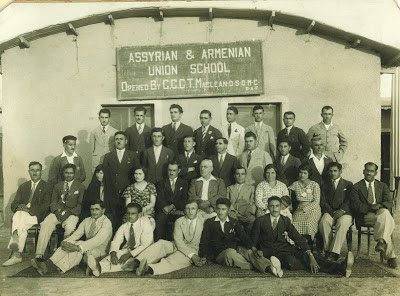 (Some graduates, teachers. and organizing committee members of the Union School founded in 1924 in Kota Camp, RAF Station Hinaidi, Iraq with Rabi Yacoub as its headmaster) 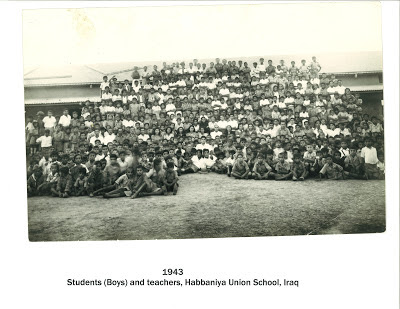 During this time period his son William and daughter Shamiram were born. He continued serving as school principal in Habbaniya from 1938 to 1944. During these years, he was instrumental in educating several thousands of Assyrian and Armenian Students.Along with his busy life he found support from his wife ”Khata” Mervat who was active in the community by teaching embroidery and needlework to the ladies in Habbaniya. She also hosted meetings of school staff at home. She was a sweet, quiet, loving and respectful lady.

(1943: Habbanyia Union School, Students (Girls) and Teachers with Rabi Yacoub in the middle )

Rabi Yacoub was an Assyrian scholar-educator, prolific writer-poet. He has translated several Shakespearean and other plays in Assyrian and had these played on stage by students. Rabi has also written extensively on different subjects. Unfortunately most of his work was borrowed by different groups and were never retrieved. Some of his work remains unpublished.
In 1944 after the school in Habbaniya was nationalized he moved his family to . He worked as a business man for many years. In 1965 he lost his wife Mervat .
Rabi Yacoub immigrated to the in early 1972 and settled with his son Emmanuel and his family in , then moved to , . lived with his son William and his family for many years. As his health deteriorated he lived with his daughter Shamiram and his Son-in-law Sargon Hermes in where he passed away on December 25, 1988 at the age of 92.
The surviving members of his family are: his daughter Shamiram Hermes and her family; late Emmanuel’s children Ted Jacob and Peggie Hernandez; late Willams’ children Dina Powers, Adena, Paul and Peter Jacob; in addition grand and great-grand children, nephews and niece.
Rabi Yacoub taught for a total of 25 years and had produced a generation of well educated youth who served their nation and families efficiently. He touched the lives of thousands of students whom he disciplined educationally and morally. He instilled in their minds a sense of responsibility. He trained and inspired confidence in them-selves. He will be remembered as a hero who served his nation in a self denial way.
Rabi Yacoub was one of a kind. He was a prominent educator. He lived full family life. He was a truly fine person and a religious man; yes, a gracious human being. This was Rabi Yacoub Bet Yacoub.