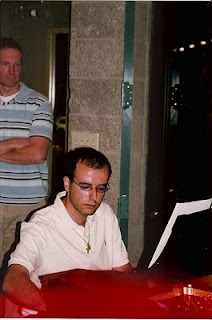 “The Assyrian Legacy” is a creation of young Assyrian composer George Somi which will be premiered at Mesopotamian Night 2010. In the article below, Obelit Yadgar is giving us a nice insight into this interesting piece of music.

Assyrian symphonic music is rare. Rather, ours is predominantly folk, church and popular music for voice, solo instrument or small ethnic ensemble. Surprisingly, for a musical nation known for the magnitude of art it has contributed to the world throughout the centuries, we have failed to embrace symphonic music. I can only hope in time that creative gap will close and that our new composers will create great works in the medium.

The good news, thanks to the Mesopotamian Night gala concert performances in the past four years, is that the noted French composer Michel Bosc and the equally prominent American John Craton have enriched the Assyrian musical sphere with impressive orchestral and operatic creations from works by William Daniel and Paulos Khofry. Also of note is the Assyrian composer Samuel Khangaldy’s oratorio Gilgamesh, a work in progress of which the overture was premiered at the 2009 concert to exceptionally high praise.

In their youth, the Hungarian composers Bela Bartok (1881-1945) and Zoltan Kodaly (1882-1967), armed with recording machines, traveled throughout the countryside and collected vast amounts of Hungarian folk melodies. Years later they used those same melodies as settings for some of their great symphonic works.

Assyrian composers have a wealth of folk and traditional melodies at hand to inspire major symphonic and chamber compositions. The music does not necessarily have to be in the western classical tradition, maintains the young Assyrian composer George Somi, though he would like to see some heading in that direction.

Somi premieres selected movements from his orchestral suite The Assyrian Legacy at the Mesopotamian Night concert and art auction, August 21, at the Gallo Center for the Arts, in Modesto, California. Proceeds benefit needy Iraqi Assyrians.

In eight descriptive movements, the approximately 35-minute long work sweeps across Assyrian history with snapshots of a people’s bittersweet journey. “It illustrates the history of the Assyrian people through music much like motion picture sound tracks follow their respective stories via music,” explains Somi. “The piece has several motifs, each representing a particular emotion from, pride and triumph to sorrow and despair.”

The suite begins with Assyria’s glorious emergence as a world power. Intertwining various melodies, the second movement celebrates the Hanging Gardens of Babylon. Hammurabi’s Law Codes are recognized in the third. The fourth movement sketches the fall of Nineveh in 612 B.C.

“The fifth movement follows the second golden age of Assyrians: the rise of the Church of the East,” says Somi. “The main emotion I try to convey in this piece is hope. I incorporate church hymns into a thematic orchestration, not only conveying the story of the Assyrians, but also bestowing a sense of glory to the hymns.” The movement’s highlight is the five-part choir singing Ashen ammeh zmareykon.

Somi frames the sixth movement around the period of the Muslim conquest from the seventh to the thirteenth centuries. “Though unrelated to Assyrians initially,” he notes, “the Muslim conquest would have dire consequences for Assyrians. It features discernibly Arab melodies, outlining not just the effect on Assyrians, but the rise of great Muslim cities like Damascus and Baghdad.”

In the seventh movement, he further expands the Muslim conquest’s direct effect on the Assyrians by painting a tragic picture of the genocide committed against our people. Starting with a solo piano playing a sad but hopeful melody, Somi lets the orchestra build on it, culminating in a march meant to symbolize the fight and strength still left in the Assyrians. “This covers the formation of Zow’aa, possibly the first Assyrian national political party since the fall of Nineveh,” he points out.

Yet in all the tragedy that marks the tumultuous journey of the Assyrians, Somi looks for a bright light in the eighth movement by reprising melodies and themes from previous movements as Assyrians celebrate in the promise of hope. At the same time, his music leaves a sense of a story that is, indeed, unfinished.

“The way I see it,” Somi says, “the story of the Assyrians has not concluded. They recovered from defeat once in history. They still retain a hope to persevere through modern times.”

Somi, who was born in Chicago, in 1988, exhibited a profound love for music early on. His mother recalls that at age 3, after hearing someone play the song “Happy Birthday” on the piano, he slipped behind the keyboard and repeated the song almost note by note. At age 7, he began piano studies. After moving to Phoenix, AZ, he joined the school band, playing tenor saxophone. “From then on,” he admits, “music became an integral part of who I was.”

A year later he was playing lead tenor in the Peoria Honor Jazz Band in Phoenix. “I fell in love with jazz in that year and have been playing it ever since,” Somi says. Although he gives a big nod to the jazz saxophone greats such Charlie Parker, Lester Young, John Coltrane and Dexter Gordon, he says Eric Marienthal, the lead alto for the Gordon Goodwin’s Big Phat Band, has captured his imagination with his solos. “They’re so funky and hip,” he says, “it’s hard not to get into it.”

Somi admits to having little interest in popular music, western or Assyrian, and, therefore, hears no discernible influence on his music from this genre. Although no expert on Assyrian popular music, Somi says, if he were to pick a favorite Assyrian popular artist, it would be singer and composer Ashur Bet Sargis for his intricate and well thought out melodies. “I believe Mr. Bet Sargis has the widest, most effective range of music,” he adds, “from lively tunes to ballads.”

Somi believes the biggest influence on his symphonic music comes from film and video-game composers such as John Williams, James Horner, Hans Zimmer, Alan Silvestri and Jerry Goldsmith, among others. “I am frequently told that my music sounds like it belongs in movies or video games,” he says. One thing he does not believe in, he says, is composing filler music, something that is there just to lengthen the piece. Rather, he prefers strong melodies counter melodies.

At the same time, he points out that if he had to choose an Assyrian musical genre with the most influence on him as a composer, it would be Assyrian church music. “My command of our church hymns is in direct correlation with the fresh take on the them in the fifth movement of The Assyrian Legacy,” Somi explains.

Currently, while pursuing a degree in aerospace engineering at Embry-Riddle Aeronautical University in Prescott, AZ, Somi plays lead tenor in Yavapai College’s Big Band II. He also serves as organist at the St. George Ancient Church of the East, in Phoenix. It is no surprise that the congregation has nicknamed him Beethoven.

“One of those impossible wishes I’ve had for a while now is to have been present at the premiere of Beethoven’s Ninth Symphony,” Somi says. “I know it would have brought tears to my eyes and made every hair on my body stand on end.”

Well, of course, that reaction is expected from a composer who, like the great Beethoven, began composing when only a boy. Somi wrote his first song at age 12. “Taking Action” was one of 12 songs chosen for performance at a musical event at the Phoenix Civic Plaza.

He began thinking seriously about composing music while a sophomore in high school. It was then that he realized how sparse Assyrian symphonic music was. How ironic, he believes, a nation that invented music and music notation is so poorly acquainted with it. Further, he believes music to be an integral part of a nation’s culture and that Assyrians must develop that.

A sense of duty to the Assyrian nation, as well as strong encouragement from his mother to write something about the Assyrians, led to his work on The Assyrian Legacy. He started the suite in his sophomore year in high school and still thinks the work is unfinished. Somi says he hopes The Assyrian Legacy is appropriate for an important event such as Mesopotamian Night gala concert.

“Music is one of the things that holds a culture together,” he says. “Call it a cultural epoxy. With our youth growing up in several nations across the world, we cannot afford to have a weak epoxy to hold us together. It must be stronger than ever.”