The Master of Ceremonies for Mesopotamian Night 2009

It is an honor to announce that AAS-A Central Valley Chapter has asked Mr. Obelit Yadgar to join us again as the master of ceremonies. The tremendous positive feedback that we received from our audience as well as those that have watched the Mesopotamian Night 2008 DVD, encouraged us to invite him again to help with another successful event in 2009. Mr. Yadgar has promised to contribute to this blog in the coming months. 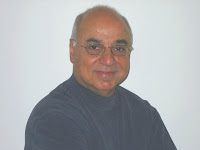 Obelit (“Obie”) Yadgar has enjoyed a dual career as writer and radio broadcaster.
He spent more than 30 years as classical/jazz music radio host and arts interviewer for commercial and NPR stations in major U.S. cities. Obelit’s writing career began with his tour of duty in Vietnam as a U.S. Army combat correspondent.

Since then, he has written short stories, print and online magazine features and essays, radio/TV commercials, promotional and industrial video scripts. Obelit’s essays on the Assyrian life appeared in Zinda Magazine (zindamagazine.com) in his column Musing With My Samovar.

“Will’s Music,” his first novel, published in 2005, is a love story based in the world of radio and dance. His second book, “Obie’s Opus,” published in 2007, sprinkles tiny bits of Obelit’s autobiography with a large collection of amusing little stories and anecdotes about the great composers. Currently he is finishing a second novel. His books are available from: obieyadgar.com.

Obelit, who is of Assyrian heritage and is named for the Assyrian King Ashur-Uballit I (1363-1328 B.C.), credits his writing inspiration to his great uncle, the renowned Assyrian writer, teacher and nationalist Binyamin Arsanis (1884-1957).

Born in Baghdad, Obelit grew up in Iran until immigrating to America in his early teens. He lives in Milwaukee, Wisconsin, with his wife Judith. He has two daughters, Sonja and Sadie. Now he devotes much of his time to writing.